Well it may come as a surprise to many of you, but yes we did turn out a rugby XV for an annual fixture against Alresford RFC from 1992 to 1996 the results were as follows:

A pretty creditable performance from a team that had no history of playing together.

Our only ‘ringers’ were the London Cornish RFC front row, a club from whom we borrowed shirts for the game courtesy of Jack Whillans long connection with the LCRFC

The games were, it could be said, very competitive, rugby clubs were not meant to lose against cricket club scratch sides, but naturally post match saw a grand ‘ noggin ‘ at The Horse and Groom in Alresford. 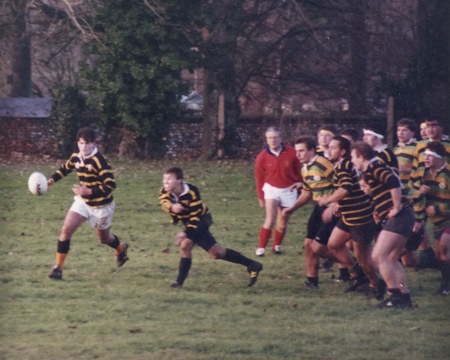 L to R: Shinner – ? – Whillans
We use cookies to ensure that we give you the best experience on our website. If you continue to use this site we will assume that you are happy with it.Ok